Nothing, really. The supernatural may be horrifying but it can’t compare to the real-life twilight zone that this year has been, with an all-pervasive, unfathomable pandemic running lose. People lost their lives, their livelihoods and for months, the entire world sat isolated in their homes, loading up on immunity boosters, pining for the time when a simple hug could be taken for granted.

When I asked celebrities their spookiest experiences, many of them simply ranted about the months long Halloween that 2020 has turned out to be. There were other replies: ‘I get scared when I see my co-actors without makeup,’ wisecracked one, who shall not be named.

But actors spend so much time shooting in deserted locales and some of them had had some truly bone-chilling experiences. Here are some of them – be prepared to be very, very scared … or sometimes, just entertained …

Humayun Saeed and the out of bounds alley

In his more than two decades long career, Humayun Saeed has never gotten tangled with the supernatural – except once while shooting for the movie and drama, Bon Roye. And he simply followed the precaution of avoiding ghostly interactions altogether.

Evidently, the haveli where shooting took place had an alley which was considered haunted. “Sometimes we would hear a child crying. And once, one of the boys in our crew got thrown out,” Humayun recalls. “So we simply didn’t go into the alley.”

Simple as that. And sometimes, when you’ve got movies and TV dramas to make, you really can’t allow a few ghosts to slow you down. Who would have thought that these happy, glamorous characters had ghosts looming upon them in the background?! Yasir Hussain did a very good job of scaring me!

Yasir Hussain, it turned out, often ends up crossing paths with the supernatural although it doesn’t really perturb him. “I used to live in a two room apartment and I lived in one room while a supernatural old man used to live in the other,” he told me. “I don’t know what he was but he never disturbed me. In the morning, he would come into the lounge and say his Fajr prayers and when my friends would come over, he would go into the kitchen and start moving the utensils. I would call out to him not to make noise because my friends were over and he would stop. I never got scared but my friends did.”

Here’s another: “We were shooting a horror soap called ‘Dareecha’ in this home in Karachi’s PECHS area and strange things would keep happening there. Shoots would get stalled and things would get moved around. One day, the woman from whom the house had been rented came around and said to one of the crew to take care of her son. He asked her where her son was and she said that he lived in the home. We later found out that someone had committed suicide in the home after which the woman had moved away and rented it out.”

Scary! But Yasir asserts, “I don’t get scared by such things.” Good for him. 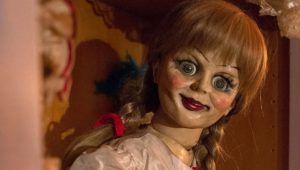 That time when Ushna Shah met a creepy doll

Rivaling Yasir was Ushna’s very spooky recollection which came with all the makings of a horror drama: an ancient building, the late hours of the night and an eerie doll!

“I was working on a telefilm with Angeline Malik about pre-partition Pakistan and we were shooting in a completely dilapidated old building in Saddar,” says Ushna. “The building dated back to pre-partition and it was so old that it didn’t even have any running water. The apartment that we were shooting in even had furniture from that era. It belonged to a really old man and there was a dining room there where a table was completely covered with musty old books and an eerie doll sat at the head of the table. The dining room was connected to the rest of the house through a narrow passage where we were shooting.”

She continues, “The shoot continued till about 3 a.m. at the night and I would have to keep changing saris for different sequences. Angeline would go into the dining room with me to help me change and we would keep joking about how creepy the doll was and how it was staring at us. The doll kept looking ahead but then, the third time we came into the room, its hands were pointed up towards the ceiling.  We both screamed and cancelled the shoot right then, rushing out of there.”

“Nothing spooky has ever happened to me,” says Yumna Zaidi – although she did live in a haunted hotel room once. “We were shooting the drama ‘Dil Kya Karay’ in Nepal and the hotel was in a far flung area. I enjoyed being there. Another drama was being shot there at the same time. Some years later, I met the other actresses who had been working there and they asked me how I could have stayed all alone in the room that I had been in. Two of them had stayed in the same room later and when they would wake up, there would be pictures of the room in their cellphone.”

Why hadn’t Yumna experienced anything? “I suppose I was just so wrapped up in the script,” she muses. No time for spooks! “I am a ghost myself,” laughs Zara Noor Abbas, who revels in scaring her co-workers on the set.

During the shooting of the movie ‘Parey Hut Love’, Zara brought on the theatrics by pretending to have gotten possessed. “Stylist Adnan Ansari was in on the joke and we had convinced everybody but then my director, Asim Raza, started getting really worried and I had to break my act,” says Zara. “Another time, I locked myself in a bathroom and started banging on it. Shehryar Munawar and our stylist Haani thought that the bathroom was empty and a ghost was making all the noise!”

“I love, love Halloween!” Zara enthuses. That’s totally believable – although the people around her may not love it quite as much!