“The doctors tell me that I can get the best medical care in the U.S.A.,” said the country’s most famous comedian, who clearly looked unwell. “I am addressing the Prime Minister of Pakistan Imran Khan for assistance. Imran Khan, I have always answered your call when you needed my help for raising funds for the Shaukat Khanum Memorial Hospital. I hope that you will also be there for me.”

It was sad to see the comedian, a huge name both in Pakistan as well as internationally, struggling with his health and having to resort to making a plea, on TV, to the government. The very next day – Friday, 10th September – Assistant to the Prime Minister Shahbaz Gill Tweeted that the PM had taken note of Umer Sharif’s appeal and was going to be helping him out.

Some hours later, Waseem Badami Tweeted that a call from the PM’s office confirmed that the comedian would be assisted in his travels.

It is always unnerving to see a celebrity, once observed in his prime, traveling the world, thronged by fans, suddenly struggling with old age and disease. However, it is also sad that time and again, videos of veteran Pakistani celebrities have started surfacing, asking the government for assistance. Frequently, once popular stars have lived their old ages with limited finances, struggling to pay their medical bills.

This is not one of those times. A Tweet by Waseem Badami confirmed that Umer Sharif, in the video, was not asking the government for financial help. Instead, he required them to facilitate his traveling by easing the visa process. The same assertion was made in a post on Umer’s official Facebook page by his family: 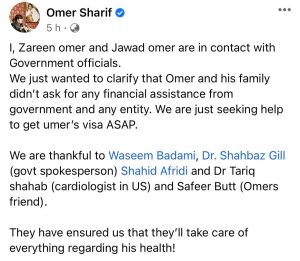 International travel is more or less at a standstill right now due to restrictions imposed by the coronavirus and the comedian currently requires to be able to travel without having to wait through lengthy visa procedures.

For now, the comedian is hospitalized in Karachi, struggling with a flailing heart and kidneys. “His heart needs to be operated but he is so unwell right now that the doctors haven’t been able to operate,” explains his first wife, Deeba Ghazal. “Please pray for him. I live in Lahore but I have now flown down to take care of him.”

“His condition has also suffered because of some of the problems that have recently arisen in our home,” she added. 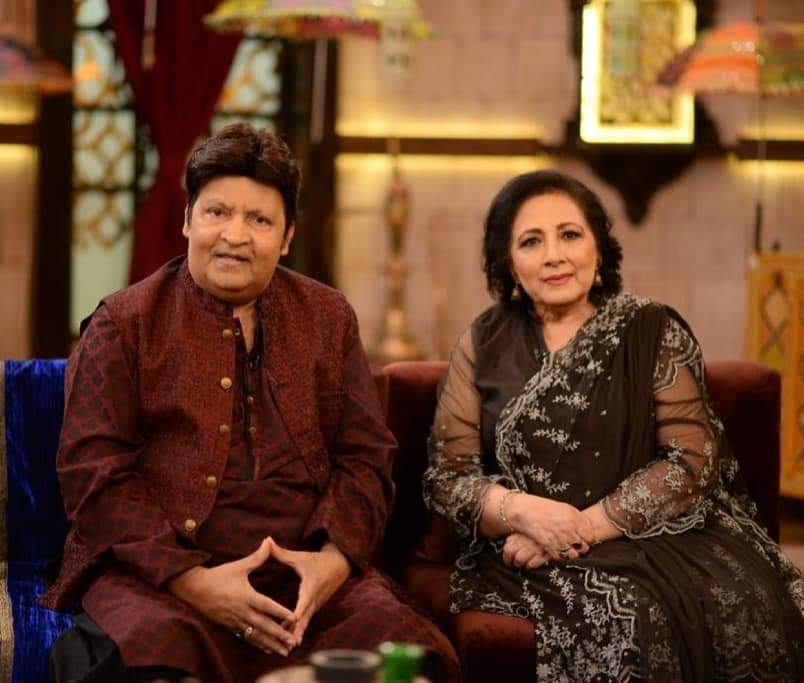 This may be an allusion to the rumored domestic issues Umer has been having with his other wife, Zareen Ghazal, that have further aggravated his medical condition. Some months ago, the news had filtered out that Umer had taken his third wife to court, accusing her of having transferred his property to her name. 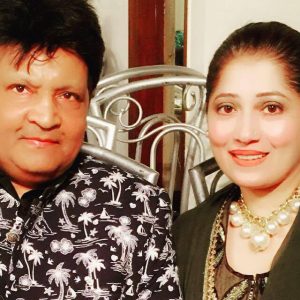 Celebrities and fans from around the world have been sending in messages, wishing the comedian a quick recovery. It is sad, though, that videos are now needed to draw the government’s attention towards the needs of some of the country’s older lot of stars. Even the visa procedures could be facilitated without the need to create a furor on national TV.

Ultimately, everything cannot be about TV ratings or getting ‘hits’ on social media. Individuals, celebrated around the world and renowned for their achievements, shouldn’t have to come on TV and compromise their self-respect in order to make appeals.

A post from the comedian’s official Facebook account, made by Mrs Zareen Umer states that the next 24 hours are critical for the comedian and prayers are needed.

May he get well soon.