Circa, 2016, I met designer Farah Talib Aziz for the very first time. She was operating from the basement of her home at that time, racks clustered with heavily embellished clothes winding about her work-desk. Farah’s daughter Maliha Aziz Jamil, a pivotal member of the brand, showed me around. Clients drifted in and out while I was there. The Farah Talib Aziz (FTA) label was 15 years strong by then and was increasingly wielding clout by virtue of social media advertising and an enthusiastic clientele. I have met Farah and Maliha many more times since then – the launch of their Karachi E-Street store comes to mind, there was a lawn launch some years ago in a restaurant in Clifton and most recently, at the launch of their flagship store in phase 8 Karachi. The brand has mushroomed into a major player in the market for bridal-wear. The clients continue to constantly drift in and out, back to back.

Huge florals are splattered on the display window of the new flagship FTA store. It’s quite apt, considering that flower power has always been a major element in FTA designs, as have multicolored melanges of feminine hues. Inside, the ready-to-wear racks are lined with designs that run the gamut from evening-wear to more embellished tunics that can be amped up for weddings. There are tiny little rose buds embroidered on pastel whites and pinks, digital prints in raw silk worked with scalloped laces and embellished necklines, lame’ glinting with silver embroidery and bead-work running down the length of shirts. Jewelry from Jaipur & Co, part of a collaboration, is also on display. Designer Farah Talib Aziz is wearing a design that I have liked the best from her recent collection: an all-black shirt, worked with little sequins with florals splayed out around the neckline. Maliha Aziz Jamil wears another design from the new collection; a glorious pink raw silk which can masquerade as evening-wear as well as – with the right accessories – a dholki outfit. The bridal studio a floor above sings to the tune of heavy, heavy embellishments. The latest designs are pointed out to me but I have seen many of them before, in the images from the latest FTA campaign that was floated out some days ago. The campaign had been eye-catching, traversing the events and traditions that encompass the desi wedding, with models and celebrities as wedding guests, dressed in FTA, of course. It was a beautiful campaign – but the clothes now demand attention all on their own, set up on mannequins, sans models or celebrities. A beautiful long shirt in peach comes paired with a silk lehnga in a chintz print, worked with a border at the hem. A pistachio green angarkha stands next to it, with pops of pink added in. Another very heavily embellished angarkha is entrenched with thick swathes of florals which taper down to multiple borders. The bright pinks encompassing this angarkha are complemented by a plum colored dupatta, splattered with sequins and a lehnga in deep green. At the other end of the spectrum, lame and net are mixed in on heavily worked shirts in ice blue and light metallic pink. There are farshi ghararas and lehngas and digitally printed silks worked with embroideries, all primed for the many brides-to-be that I have seen crowded in the FTA studio on regular working days.

On the day of the launch, though, the brand’s regular clients, celebrity friends and media simply roam about, taking pictures and sampling a lavish tea spread. Celebrities Nida Yasir, Ayesha Omar, Laila Wasti, Areeba Habib, Sharmila Faruqi, Rubina Ashraf and her daughter Minna Tariq also visit – they are all among a considerable contingent of local celebrities who frequently wear FTA. 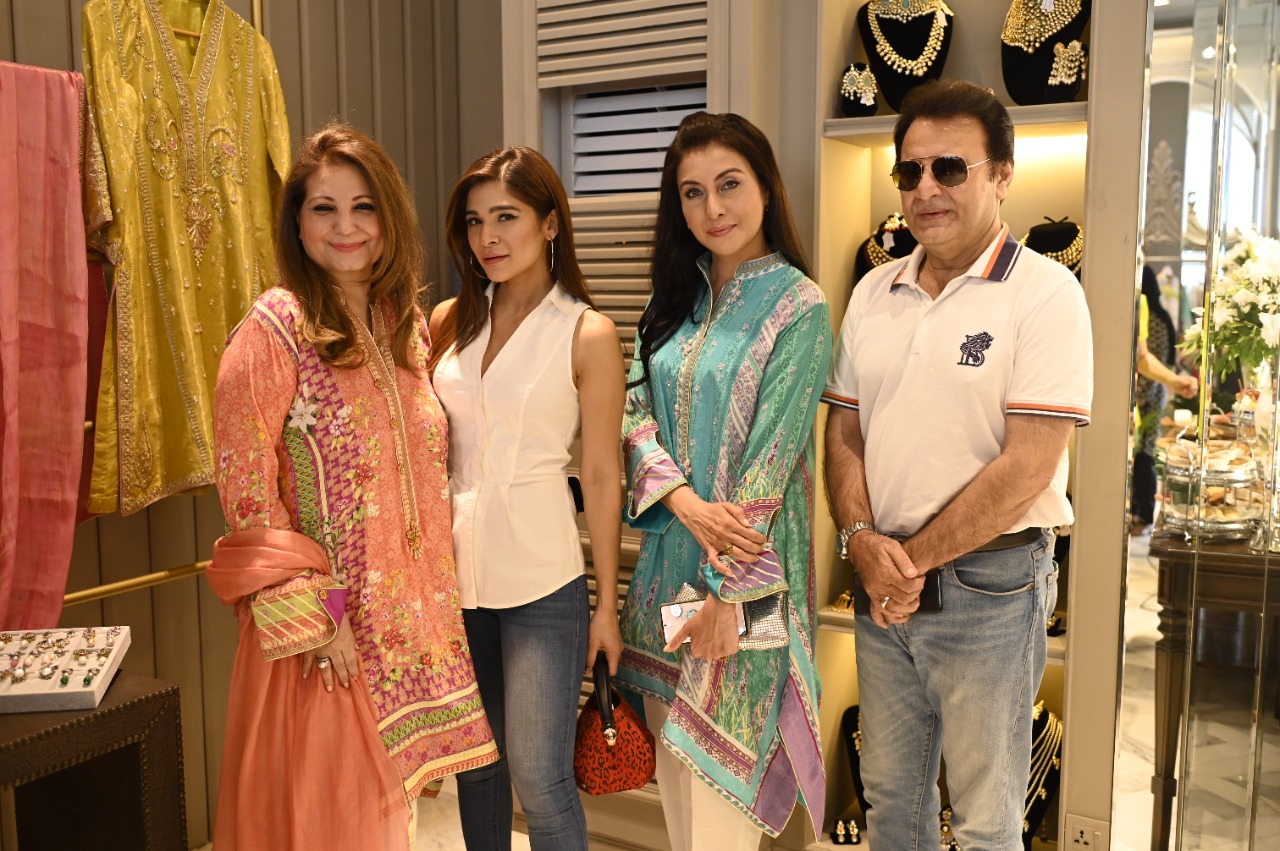 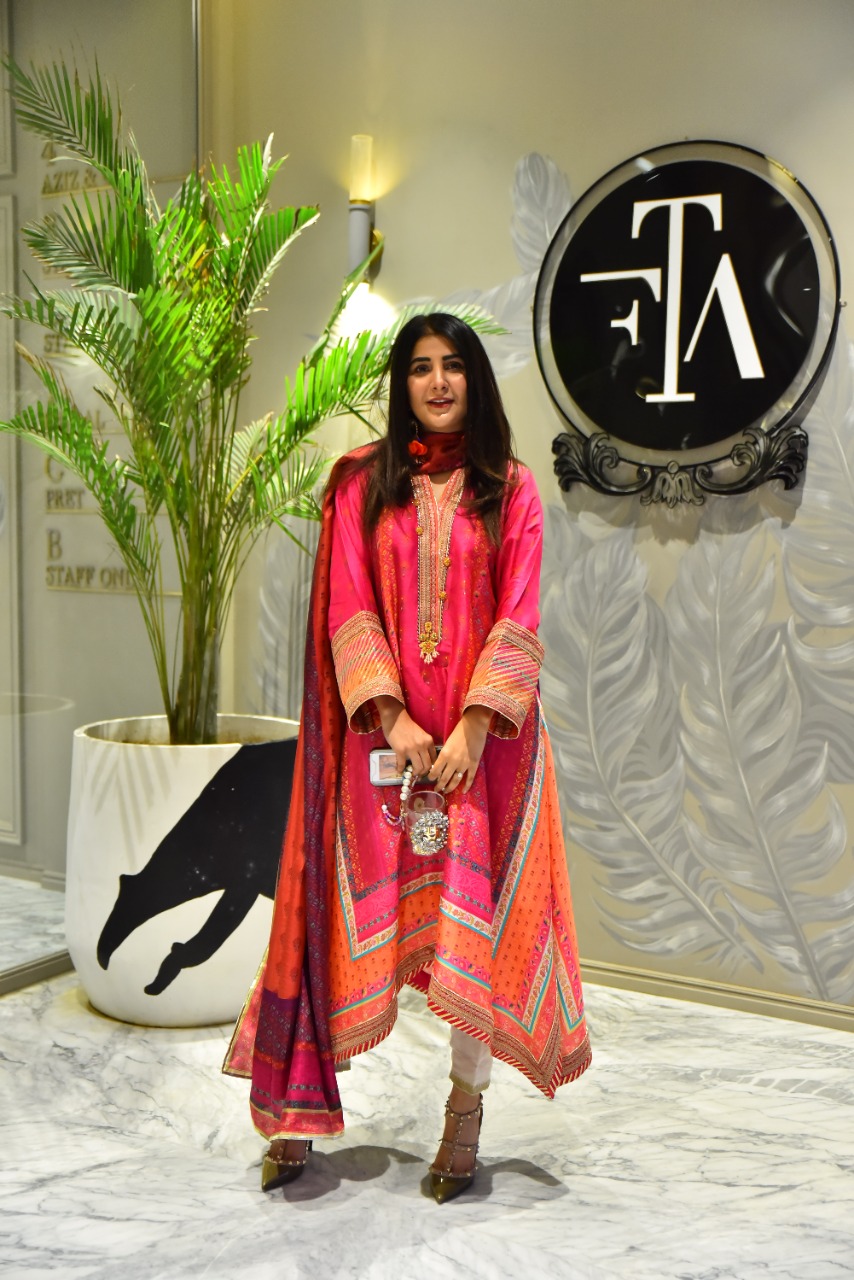 “The bridal campaign went well,” commented Maliha Aziz, “and people have been placing orders for their weddings. We’re just really happy with the way things are going.”

Her mother, though, by the time I say my goodbyes is tired. It’s been a busy launch. And a well-received one. From that day many years ago when I met Farah in her basement to present times when she is the first choice at weddings for many brides, the brand has come far.

What next? Perhaps, a solo show. Or maybe participation in fashion week, a PR exercise that the brand has only done very rarely.

Maliha Aziz tells me that she’s ‘thinking about it’ although I personally think that it’s time FTA stands out on its own, with a standalone event catering to clientele and media. With more than two decades in the business and a persistently burgeoning clientele, I think that it would be exciting – for the brand and for all the many people that look out for it.