We’re all sticklers for a romance; where a rich eligible bachelor who has sworn off commitment is forced by circumstances to marry his office secretary, a forthright young girl working hard to support her family. We wait for the brooding hero to fall for the fine upstanding girl, for his egotistical ways to get changed by the power of true love. It’s a story right off a romantic paperback. It’s the reason why Six Sigma Entertainment’s Habs on ARY Digital has the TV audience hooked.

To capture the imagination of the audience, it was necessary for the lead pair to have great chemistry. They needed to be able to make people sigh when they shared a simple smile or held hands ever so briefly. Feroze Khan and Ushna Shah are serving this purpose very well. Feroze’s complicated Basit and Ushna’s hesitant but opinionated Ayesha have won hearts and it’s no wonder that the viewership ratings have been skyrocketing. 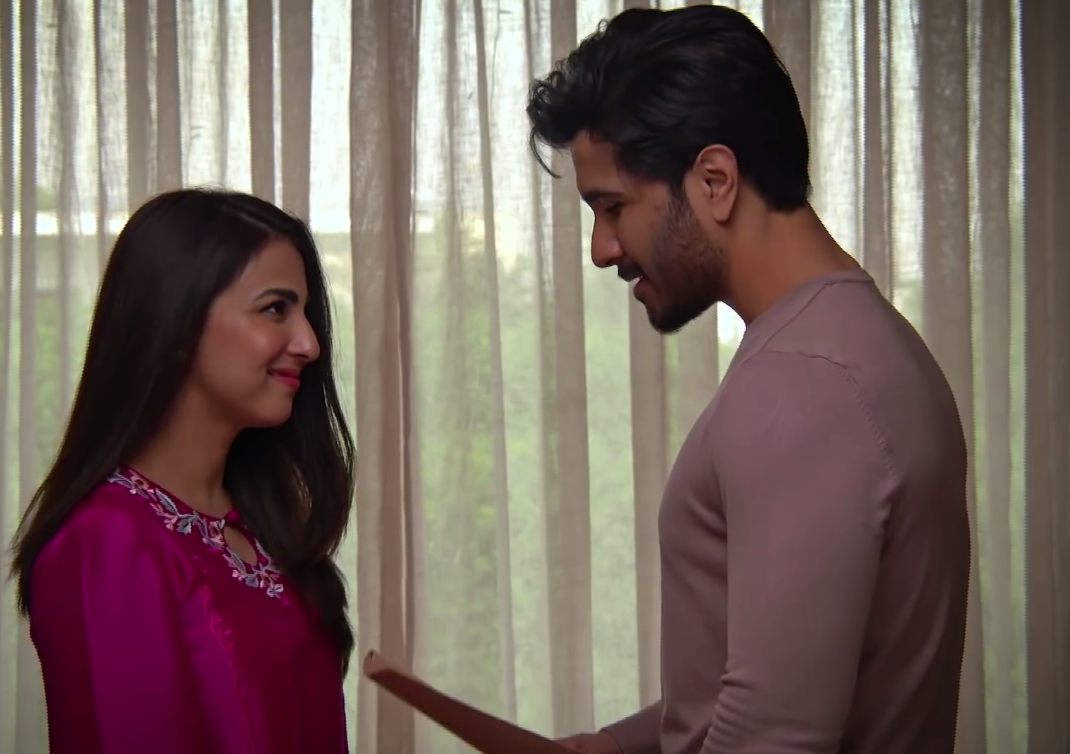 Of course, both actors have proven their mettle many times before. Feroze is one of TV’s most-loved young heroes. His dramas are huge hits and his characters always end up getting talked about. With Basit, though, one sees a newer side to Feroze. He has been playing the angry, spurned lover for a while now but in Habs, he’s more restrained. You see Basit dwelling upon his words before he says them out loud. He can be insufferably arrogant at times but he also has his sensitive side. He is problematic, certainly – and his journey towards becoming more sensitive and a better husband may possibly form the crux of Habs’ storyline.

Basit just has a very different vibe from the volatile men characterized by Feroze in the recent past. It’s refreshing and he acts very well, probably enjoying playing the role quite as much as one is enjoying watching it.

And Ushna Shah shines! Far too many times, she has been relegated to playing the silent good girl biding her time until she gets her happy ending. The quintessential long-suffering drama heroine may be much-loved by the masses but she can be pretty boring and forgettable to watch and, I imagine, even to enact. With Habs, Ushna gets to play a character with more of a backbone. Ayesha is good through and through, there’s a fair share of toxicity in her life but it doesn’t quell her spirit. She speaks her mind and refuses to be treated like a doormat – so far, at least. Ushna’s performance in Habs could very well become a gamechanger for her career-wise, highlighting that she’s quite capable of playing characters with complicated nuances.

The ensemble cast is a strong one too. Saba Faisal is a pro at playing maternal figures. Both good and bad ones. In Habs, she’s Ayesha’s mother with a fixation for money that ultimately stems from the burden of keeping her house running. Dania Anwar and Janice Tessa are doing fine jobs as Ayesha’s sisters and Irsa Ghazal is certainly a great actor. One hopes to see more shades to her character – I think there will be – as Basit’s mother.

Musaddiq Malek’s direction is smooth – he acts well too! What has helped the actors is the strong character development. Even though the focus may often be on the main leads, you also understand the psyche of Ayesha’s mother, her phuppo, her sisters, Basit’s mother. You can tell why they are all acting in certain ways. There are scenes and dialogues allowing every actor the space to emote. That’s a story well-told.

The romance, the acting, the strong back-stories delving into economic difficulties, childhood trauma and broken hearts, the occasional spurts of humor and even a hummable title track make Habs the sort of drama that gets you hooked, definitively. But will it continue to be this way as the story continues?

Or will stifling ‘habs’ descend upon it? Will it succumb to the drags that are so common in TV dramas? Will the character development continue to be watertight or will there be gaping holes in the narrative? Will Basit continue to be the complex hero battling with his conscience, figuring out his feelings or will he downslide towards becoming the typical TV desi husband? Will the romance move along at a riveting pace or will it become painful, even toxic?

I hope not. It’s been a while since TV’s delivered an all-out, dreamy, right-out-of-a-paperback romance.

The ‘Mushkil’ good girl, with a spine