Some days ago, teasers were released on the HUM TV Network of an upcoming drama titled ‘Dobara’. Directed by Danish Nawaz, starring Hadiqa Kiani and Bilal Abbas Khan, there was plenty of curiosity regarding the drama because of its popular main leads. The teasers only managed to build up the suspense even more.

Hadiqa Kiani was portrayed as an older woman who seemed to be in love with a much younger Bilal Abbas Khan. A glimpse showed actor Usama Khan trying to strangle Bilal Abbas. In another glimpse, Usama declared to Hadiqa that she was being unfaithful to his father. To this, Hadiqa replied that one did not have to be faithful to the dead.

Obviously, Hadiqa and Bilal are in a relationship. It seems like an unconventional story – possibly not the sort of romance that leaves you starry-eyed – but one that isn’t entirely impossible. The drama’s director Danish Nawaz confirms that ‘Dobara’ is giving out a social message.

“It’s telling you that this, too, is a possibility,” says Danish, although he doesn’t want to reveal whether Bilal and Hadiqa get married in the drama. “There’s nothing cringey about it. It’s a story about relationships and caring.”

“It’s not a heavy duty serious drama either. There are lighter moments and a lot of layers to the story courtesy a very varied cast,” he says. 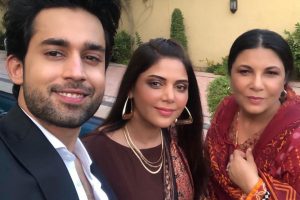 “Javed Sheikh’s character is very interesting,” says Danish. “He adds some humor to the plot.”

‘Dobara’ will be singer Hadiqa Kiani’s second acting role, her first being the drama ‘Raqeeb Se’ which aired on the HUM TV Network earlier this year. When making her acting debut, Hadiqa had talked at length about being very careful about taking on roles that were unique and that could allow her to experiment. Her role as Sakina in ‘Raqeeb Se’ got rave reviews. ‘Dobara’, it appears, has also appealed to the singer turned actress.

“Hadiqa is a natural,” says Danish. “I asked her to be as she was, just the way she wanted to play the character.”

For Bilal Abbas – veritably TV’s most popular hero – the drama is also an ambitious choice, diverting away from typical love stories. Then again, Bilal’s impressive acting repertoire is testament to how he is able to play the most heavily nuanced roles exceptionally well. With this drama, Danish Nawaz dabbles with a serious storyline, as opposed to his last project, the Ramzan romantic comedy ‘Chupke Chupke’. Some of Danish’s other recent dramas include well-received storylines like Khaas and Kashf.

“I always want the dramas that I direct to be relatable to the audience,” says Danish. “I am also very careful that I don’t hurt anyone’s sentiments. I want people to watch my dramas because they find them interesting, not because they get embroiled in controversy. Hopefully, people will like ‘Dobara’.”

The teasers, at least, are promising. There are also more teasers on the way, according to Danish. ‘Dobara’ is slotted to begin airing by mid-October this year.