It’s a jungle out there, on social media; rife with trolls, strong opinions and smart alecs who waver from being hilarious to being completely offensive. No one knows this better than Pakistan’s famous, many of whom are perpetually goaded by commentators on Twitter and Instagram. It can be unnerving, as many celebrities often admit in interviews, and sometimes they clap back at particularly cruel or nonsensical remarks.

Fortunately, Pakistani social media commentators are creatures of habit. Their remarks tend to be very predictable and repetitive. Their celebrity targets generally develop thick skins, knowing that trolls only become more persistent once they are given any attention. From a vantage point, certain comments are ridiculous to the point of being funny. Case in point, Jemima Goldsmith whose romantically inclined Pakistani Twitter followers never cease to ask her when she will get back with Imran Khan! Scanning behavioral tendencies on Instagram, here are the most frequent ways that people react to different celebrities’ images. Most of these tendencies are nothing to be proud of – sadly, social media tends to thrive on vitriol and gossip than on spreading positivity and encouragement:

Our unrelenting morality brigade believes that it knows precisely which star is going to heaven – and particularly, all the many who are going straight to hell. If a celebrity – particularly, an actress – commiserates over a natural calamity, she is told that such disasters only occur because people like her spread vulgarity. If she agitates against a vicious gang rape or child molestation, her trolls will inform her that women like her spread sexual frustration and are the root of all such evils. 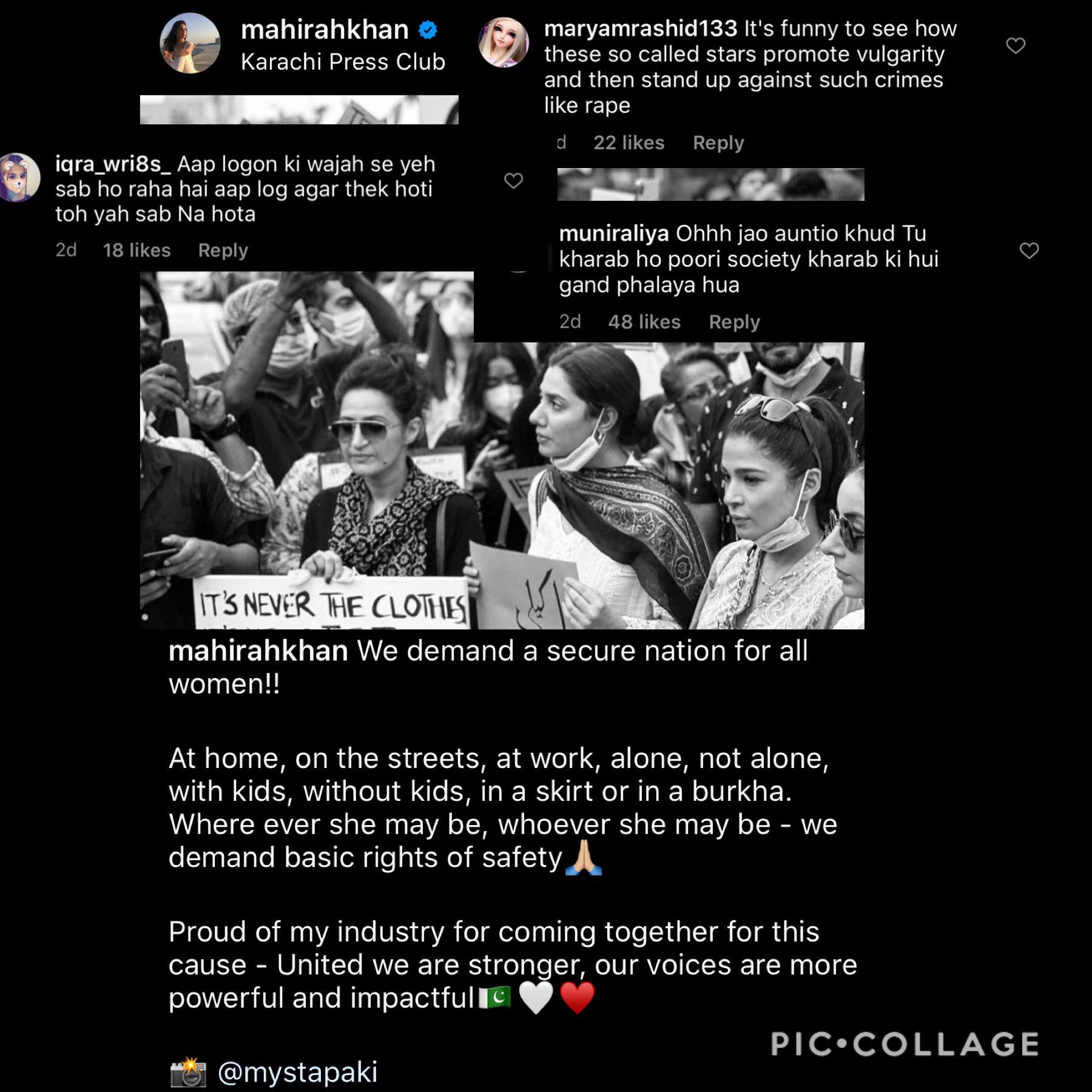 Mahira Khan and Ayesha Omar protesting against a violent gang rape – and being insanely told that ‘it’s all their fault’! Closely related to the cries of ‘shame!’ is he rhetorical question that plagues every single actress in the country: ‘Are you Muslim?’ Obviously, the implication of asking this question is that the trolls feel that the actress is not behaving in a Muslim-like way. But who are they to decide? The point is, should people feel that an actor or actress’ social media profile is against their religious values, they can just unfollow him or her. But that wouldn’t be as much fun, would it, as it would be to sanctimoniously preach righteousness and make religious declarations.

On the other hand, Pakistani trolls go into raptures over an actress who dresses in shalwar kameez, particularly with a big dupatta. Every now and then, she could cover her head and gain even more ‘MashaAllah’s. The well-meaning advice is also offered to her that she should dress like this more often – even if she doesn’t want to, even if she doesn’t even wear shalwar kameez in her personal life, even if the picture that she posted was merely a paid endorsement for a lawn brand! The two complete extremes that I have often observed on actress Ayesha Omar’s social media … a girl wears a shalwar kameez and she gets showered with blessings, she puts up a picture from her personal life and people become unbelievably evil!

And when Kate Middleton visited Pakistan last year and opted to constantly wear a dupatta, social media sent out trillions of MashaAllah’s her way! Throwback to the Royal Visit Pakistan 2019 … a princess … wearing a dupatta … on her head!!

‘Halima Baaji, don’t do this!’

Esra Bilgic may be Turkish but ever since Pakistanis became enraptured by the Turkish series Dirilis: Ertugrul, they have considered her as one of their own. Esra plays Halime Sultan, the brave, honorable, quintessential Islamic heroine. She looks beautiful and has enacted the role very well. In fact, she has been so good at it that local social media is aghast any time she posts an image from her personal life: dressed in Western wear, soaking up the sun at the beach or hanging out with a male friend.

The reactions vary from the tearful – ‘Halima Baaji, how could you do this?!’ – to angry – ‘How could you play an Islamic heroine but not be afraid of the fire of hell?’ – to quips about her love life – ‘Ertugrul will not be happy with this way of dressing!’ – to ‘sincere’ advice – ‘I beg you, please do not dress in ways that are not liked by God!’ 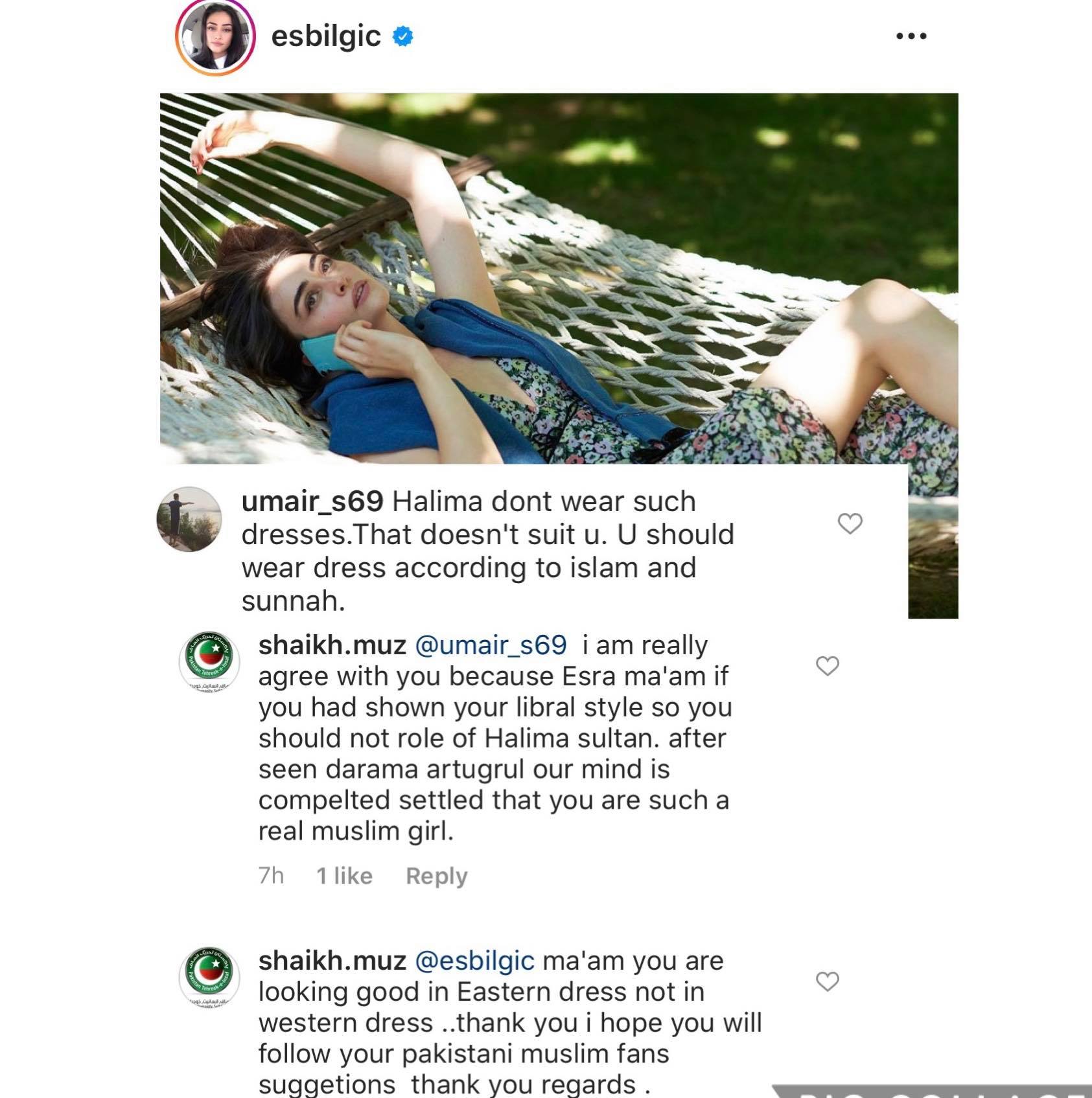 Esra must have initially been unaware of how vociferous Pakistani fans can be which is why she ignored the comments at first. But then, she posted an image of herself at the beach and it triggered such a vicious outpouring that she had to take the route that many of Pakistan’s actresses take all the time and turn off her comments section. Ultimately, she did recently clap back at a troll. Yasir Hussain and the Ertugrul remarks

When Dirilis: Ertugrul’s Urdu-dubbed version ran on our state-owned channel, PTV, some months ago and became a huge hit, actor Yasir Hussain voiced his concerns. Why should Turkish actors be given air time on a local channel? Would they also end up endorsing local products, diverting this revenue stream away from Pakistani celebrities?

He asked these questions – and some more – again and again and again. And Ertugrul’s many many Pakistani fans were not pleased. Ever since then, the ‘Comments’ section on Yasir’s Instagram page tends to be flooded with Ertugrul references. The actor often jokes right back as well. 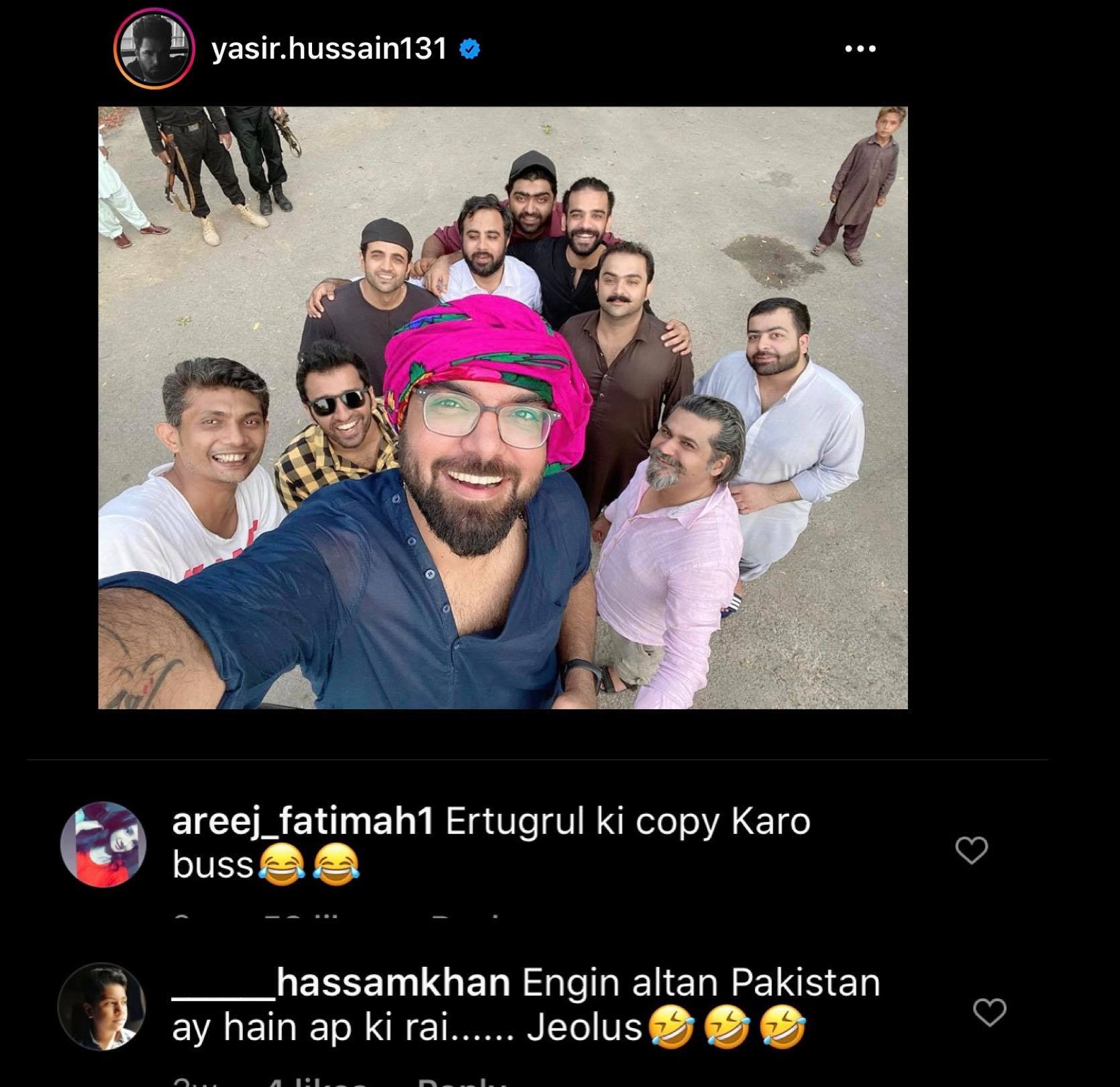 Actors Iqra Aziz and Yasir Hussain got married earlier this year after a very public courtship. The two look extremely happy together, posting sweet videos of cooking together, camping out, spending time with friends and braving the long weeks of Covid-induced isolation.

A lot of very irritating people on social media don’t care about this, constantly making snide remarks about the couple. Sometimes, the comments are so unfathomably cruel, peppered with curse words and ugly references, that they make one cringe. How can people, from their social media vantage points, be so passionately hateful about a celebrity couple that they do not know personally? Musician Asim Azhar and actress Hania Aamir were also a high-profile celebrity couple and they were often paired together in projects throughout their relationship: showstopping at a fashion show, starring in a video for unstitched lawn and generally featuring each other on their respective Instagram accounts. They were very well-loved. On the flipside, when it was found out that they had broken up, via Hania’s Insta-live conversation with Aima Baig where she declared Asim to be a friend, the jokes started coming in.

Asim had been ‘friend-zoned’, observed Twitter and Instagram, getting creative with memes that trended for days. Eventually, both Hania and Aamir posted statements on social media about how they were still great friends. Social media didn’t care. The jokes kept coming in. Some months later, both artistes have been making in-roads into their careers. Asim has been launching one single after the other while Haina has been starring in two heavily-rated TV dramas. You’d think that would distract social media and sometimes, it does. So many weeks since Asim and Hania’s break-up, social media trolls refuse to forget about it!

But give the trolls a chance and they return full-throttle with jokes and comments. What’s the best way to deal with the teasing, prodding and sarcasm, which doesn’t cease even during tough times? Here’s some sage advice, courtesy Mehwish Hayat: